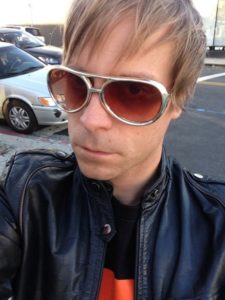 A primarily self-taught pioneer in the DAM industry for Film assets, Roberge has worked with some of the leading companies in enterprise DAM, cataloging over a million assets in a single year.

What companies/organizations have you worked for as a DAM professional? What was your role at each?

I have worked for Nomad Editing Company as a DAM professional for the past 3 years. I work for their main office in Santa Monica which also oversees their NYC and London location.

My job consists of maintaining their asset database which I built from scratch–the company has been around more than 30 years, cuts commercials and has been the sole source for Apple commercials since the eighties. I also digitize all of their commercial spots, create proxies, maintain their client server, create manuals, back up our SAN nightly, deal with vendors, train staff and attend seminars/expos on the latest DAM technology.

How do you describe digital asset management to others?

Most “normal” society has no clue when I start talking about computer-oriented jobs so I have started telling people “I am a film librarian for Apple commercials”… ha!

How did you learn DAM? Any recommended sources?

My company’s Technical Producer started to train me and then I had to run with the reins which meant constantly working with the product’s support staff (Kris and Bryson of North Shore Automation for CatDV Pro; Tom’s staff at Cache-A; Karan and Dan at SDNA). Plus I learned a great deal on my own via Google. DAM has always been around for Banks, Libraries, etc. but I am one of the pioneers in Hollywood dealing with Film assets.

I attended several DAM meet-ups and NOBODY was doing what I do so I had no reference point. For example, I would be dealing with assets like DPX files which would crash our media system. Why?  A lot of these programs weren’t prepared for what we do. That doesn’t mean new scripts can’t be developed to create work-arounds but I had to be the one to do a lot of trial-and-error before I contacted support to essentially re-write these programs.

For example, I would be dealing with the assets from a commercial cut in Final Cut Pro from five years ago but yet the assistant editor included a lot of odd characters such as “*, ;?”  In an ideal world I could tell them to change it as it clogs our LTO system and MAM down. However, simply changing names in an edited job will make it impossible for future editor’s to relink them so I had to create a work-around script with software developers and LTO machine support staff. Did I mention I had NO computer background before this??  I had to learn everything REAL fast. But thanks to the internet and perseverance, you can learn anything pretty quick these days.

Now I am comfortable in Terminal and know a lot of backdoors for these programs/LTO machines. I had even looked into schools for this but there aren’t any (in regards to dealing with film assets). Sites such as Lynda.com and Creative Cow are great sources to learn about film editing but yet they do not offer any DAM support as of yet. In Hollywood, DAM is a new world where no person has roamed before.  🙂  Oh yes, whenever support would train me remotely or go into terminal, I would take constant screenshots while they worked so I would know what to do later on. That up arrow in the Terminal window saved me a lot of phone calls….

What’s the most important thing for someone new to DAM to understand about DAM?

Actually have a “keen eye for detail” like your resume states. If you think something might be going wrong (wasn’t archived properly), stop and ask support. Don’t rush through everything and find out 5 years from now nothing was done properly. We tend to only hear from our co-workers if something goes wrong. A pat on the back for a good job NEVER happens in this industry (thank God for the Dammy’s!)–It is given that we will perform our duties 100% accurate.

Also, double-check on all automation. It’s very easy to set up automation to essentially do our jobs for us but if you can’t double-check it (such as did the proxies get made?) then we could be in for a lot of trouble down the road. I actually had to force one company (who I won’t name) to create a proxy field in their window layout just so I could make sure our encoding program/mac cluster was working properly (and it wasn’t).

If you weren’t doing DAM as a career, what would you be doing?

Hahaha, before this I managed Hustler’s flagship sex shop. Next up, I’m hoping to make it full-time as a filmmaker.  See my last film which is playing around the world here (www.thelittlehousethatcould.net).  I also would like to be an editor (http://ma5286.wix.com/marsroberge).

What is your ongoing greatest challenge with DAM?

Every time I get it down, the system changes. I started off doing everything in LTO4s and Cache-A, now I use LTO5s and SDNA, having to convert old archives into the new ones. Next up from here will be LTO6s…  It also seems to be a business like computers where next year they show us how slow we went this year and how much easier/better everything becomes. I just always have to stay on top of the latest technology.  Or else I’ll be staring at a bunch of external hard drives sitting on shelves from the eighties that do not work any more, as I have been told with companies who lost their all their archives.

What is your vision for DAM? What will it look like in 5 years?

We will finally receive the respect we deserve.  Everyone will know what we do, our importance and everyone will have some form of DAM in their own homes.  I’m already seeing it with Adobe Premiere CS6 support.  It seems the more these cloud companies push themselves, they are helping our industry by stressing the importance of backing up files with proper organization.  There will be more jobs for us and more universities will give out degrees for becoming a DAM.

What was your biggest success with regard to DAM?

I managed to solely create a 100% accurate database with over 1 million files in my first year of working at my company.  I deal with thousands of commercials that are 1 TB+ each in size.  If anyone remembers Steve Jobs, there is no room for losing ANY information.  He was such a workaholic he could call up one file for twenty years ago in a heart beat.  I also digitized every commercial my company ever made within my first year.

What more would you like to learn about DAM?

I would like to learn more about scripting and Unix.